In February the board of directors accepted application for an upcoming vacant board seat due to the anticipated departure of Allen Haake from the area. Allen has been a resident of Murphysboro since 1977, and an Egyptian Electric Cooperative board member since 1998. Interviews were conducted to replace him on April 10th here at our headquarters office. The board appointed Kevin Bame of Murphysboro as his replacement. Kevin was raised south of Ava and graduated from Trico High School in 1975. He is a licensed CPA and earned a Bachelor’s Degree in Accounting and a Master in Business Administration. In 1986, he joined the administration at Southern Illinois University and retired as Vice Chancellor for Administration and Finance in April 2017.

At Tuesday’s board meeting Allen Haake officially resigned his position, and Kevin Bame was approved. Thank you Allen for 21 years of service to your cooperative, and welcome Kevin! 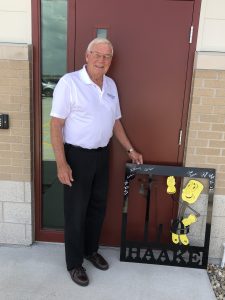